Winning the Race for Change: Lessons from the Iditarod – July 2015

During our family vacation to Alaska last month, we got the chance to meet the fabulous and frisky decedents of the Alaskan huskies who led Susan Butcher to victory in the Iditarod (the 1,049 mile dog sled race between Anchorage and Nome, through Alaska’s treacherous sub-Artic terrain). 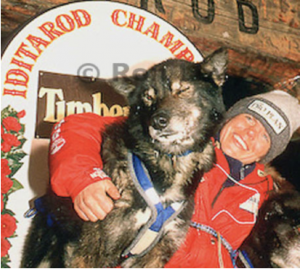 The story of Susan and her favorite dog, Granite, captured my imagination – here are some highlights:

Their story offers many lessons for us as change leaders –
here a just a few:

Inspire the “Head”
Susan had a vision of victory for her team.  She pointed them towards the “true North,” and despite naysayers and circumstances which would have caused many others to quit, she stayed the course and never lost sight of the goal.

Engage the “Heart”
Seeing potential where others did not, Susan forged an unwavering commitment between musher and dog.  Their trusting and loving relationship was the foundation of their success, and motivated the entire pack.

Help the “Hands”
Victory was only possible because of years of training, learning commands to “hike” (go), “whoa” (stop), “gee” (turn right) or “haw” (turn left), and then retraining after injury and illness.  Susan got the right players on the team, and in the right positions – lead, swing, team, and wheel.  They exercised to build their individual strength and stamina, and practiced together to hone their ability to work as a team.

All totaled, Susan and Granite won the Iditarod together four times, and Susan is the only musher to win four times within five consecutive years.  Susan was only the second woman to win the Iditarod, and Granite was one of the race’s most winningest lead dogs.

I’m also reminded that all leaders are really followers.  Susan had the vision, trained her team, and issued the orders.  However, once the race started, it was the dogs who ran the race, with Susan being pulled along in her sled.  Granite as the lead dog needed to chart the course through blinding snow storms, during periods when Susan could not see more than a few feet ahead and her limbs were numb with cold.  Granite sacrificed himself to protect Susan and the pack when charged by the moose.  These actions were possible because of how Susan as the leader inspired her team to always focus on the end goal, do whatever it takes to overcome obstacles in their path, and help each other along the way.  Susan remarked that early in her career, people told her she would never win because she “babies her dogs too much.”  At the end of her career (which ended much too soon due to her untimely death from cancer), people said, “It’s no wonder Susan wins – she takes such good care of her dogs and they take care of her.”  When we as change leaders focus on developing the change intelligence of our teams, we set ourselves up for individual and collective success.

A special note for my fellow women change leaders:  as we know from research using the Change Intelligence / CQ Assessment (see a summary of this research in a previous newsletter), women tend to lead with the Heart, and the Hands is a strong secondary style.  As we know from research using 360-degree assessments (view the webinar I did on the subject in partnership with Denison Consulting), women tend to be rated equally to or higher than men on all leadership dimensions, with the notable exception of “visionary leadership” – that is, the Head style.  Susan Butcher was a woman who combined all three critical aspects of leadership, and serves as a courageous role model for us all.

[Side notes:  Susan and Granite’s story is captured in a lovely book that she and her husband wrote for children, titled Granite.  The tale is of course reminiscent of the classic The Little Engine that Could, which is often cited as a favorite of high-achieving leaders.  As we gear-up for back-to-school season, I invite you to consider gifting these books and the wonderful life lessons they impart to kids in your life, or perhaps a school or library!  Also, if you’re interested in learning more about Granite’s still-sledding and very amazing descendants, and the kennel established by Susan and her husband and operated by him and their daughters, visit Trail Breaker Kennels.