What’s the MOST Impactful but LEAST Used Tool in Your Change Toolkit?- October 2018

QUESTION
What’s the MOST impactful
but LEAST utilized tool in our change toolkit?

If you’re reading this ezine, most likely you informally coach colleagues on-the-job every day as you collaborate to plan or execute or sustain change in your workplace.  However, how many of our organizations have formally integrated “coaching” into the change process? 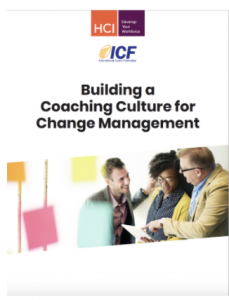 According to ground-breaking hot-off-the-presses research on Building a Coaching Culture for Change Management by the Human Capital Institute and the International Coach Federation, far too few – and we’re suffering for it.  I had the honor of contributing to the research as an SME as did several Change Intelligence/CQ Certified Change Agents. Here are highlights:

SCCs are more than 2 times more likely to be HPOs than their counterparts.

A SCC is correlated with most indicators of a HPOs including success at large-scale strategic change.

HPOs are more likely to report that change management initiatives meet or exceed their expectations for success.

A mere quarter or less of respondents are confident in their employees’ change capabilities.

However, there is greater confidence overall at HPOs.

The top reason cited for why change is unsuccessful is resistance from employees, which can be addressed in coaching.

3. Using coaching to develop managers/leaders to lead an agile culture is correlated with respondents’ greater confidence in employees’ abilities to plan and execute change:

The most frequently cited activities for change management are “traditional” methods such as classroom training and e-learning.

However these oft-utilized methods for developing capability are rated as some of the least helpful.

Conversely, coaching activities are rated as the most helpful in achieving the goals of the change management initiative(s).

The bottom line is that organizations tend to rely on traditional methods such as classroom training and elearning to build change capabilities, but the research shows that coaching – although far less frequently deployed – is rated as more effective in achieving the goals of change management initiatives, as depicted in this table:

Why is coaching so impactful during change?  In the words of J. Matthew Becker, M.Ed., MCC, Coaching and Mentoring Manager at CareSource: “We’ve got 4,000 people in an organization and it’s the whole organization that’s changing; we’ve got 4,000 different individuals that we need to help sort through this for themselves and figure out what this means for them. It’s that individual piece that we often lose sight of.”