What Can Winston Churchill Teach Us about Leading Change? – June 2015

First off, here’s a shout out to new readers of this newsletter who I met for the first time at the PMI EMEA Congress in London last month!  It was thrilling to meet so many change leaders from around the world! 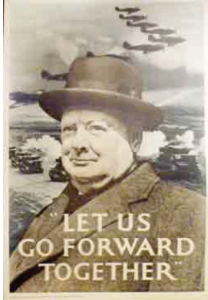 While in London I had the pleasure of visiting the Churchill Museum, an extremely well-preserved vista into the past, displaying the underground rooms where Churchill, his ministers, military advisors and staff led the effort to win the Battle of Britain and ultimately World War II.  It was amazing to see history frozen in time, and learn so many details of the life of this great man and the trials and tribulations of that great generation.

Leading change can so often feel like a war zone – devising plans and strategies, arming ourselves with tools and tactics, focusing on the mission and averting scope creep, engaging stakeholders both allies and enemies, overcoming resistance, striving for small wins during the many battles to win the war, avoiding land mines, juggling scarce resources, regrouping and redeploying, coping with stress and battle fatigue, negotiating terms and conditions – I could go on and on, the analogies are seemingly endless.

Visiting the museum caused me to ponder what we as change leaders can learn from Churchill and his stewardship of WWII.  Among many other talents, he was known for his wry wit and exception oratory prowess.  Here’s a sample relevant for all of us in the business of leading change:

One more footnote about Churchill:  he became Prime Minister in 1940, when he was 65 years old, and remained active in British and global politics long after the war ended, retiring at age 81.  Throughout the war and beyond, he is said to have outworked his staff.  I like to keep that in mind every time I get an invitation to join AARP in the mail!  We’re never too old to make world-changing contributions, and we benefit from the wisdom of our elders.